It is short for Ketogenesis.

Which is the biochemical process through which the body produces ketone bodies through the breakdown of fatty acids and ketogenic amino acids. The ketones become a source of energy for the body.

Essentially if you greatly restrict your calories or if you eat hardly any carbohydrate and not too much protein your body will be forced to use fat as a primary energy source.

Parts of your body, like your brain, can’t use fat directly as a fuel source so your body converts the fat to ketones which can be used by the brain.

(Side note: you regularly produce small amounts of ketones when you go a long time without eating. Like when you sleep at night.)

The brain seems to greatly prefer glucose as fuel (glucose is a sugar that is made from the breakdown of carbohydrate) but it has the ketone mechanism as a fail safe.

Likely so when we were hunter and gatherers and were struggling to find some food our brains wouldn’t shut off.

Before I ever had heard the word Keto I saw it’s effects.

I was actually in a Nutrition class in undergraduate school (many moons ago) and a guy I was friends with was sitting behind me.

The class started and he tapped me on the shoulder. I turned around and he had a pretty glazed look in his eyes and he said, “Can I borrow a piece of paper and a pen? I forgot my backpack.”

I replied, “Yea for sure, but how did you forget your backpack?”

I’ll never forget his answer, “I haven’t had a Carb in like 5 days.”

He was cutting for his first bodybuilding show and his brain was definitely in a bit of a fog.

I was shocked that anyone could actually go that long without having any Carbohydrates. Especially sitting in Nutrition class back in the day when they were still trying to teach us that fat is bad and everyone should just eat more carbs.

So why is Keto so popular now?

Two main reasons I see are:

The fast weight loss is the result of a couple of things.

One is when you store carbohydrates in the body they are attached to water so when you use up all those carbs and don’t replace them you will also reduce the amount of water in the body.

(Fun fact is for every 1g of Carb stored it is attached to 3g of H2O. So if you have one lb. of Carbs stored around your body you will also have 3lb of water.)

As you can see if your carbohydrate stores are diminished you will see a quick drop in weight on the scale.

Another reason people see early success is that when you ditch the carbs and replace them with protein and fat it suppresses your appetite and you end up eating fewer calories. (It looks like in the long term this benefit goes away.)

Seeing quick weight loss and feeling better by eliminating inflammatory foods is likely a huge positive boost for most people.

I tried a version of Keto myself a few years back when it was starting to get popular. I did what is known as cyclical Keto. Which meant I ate high fat super low carb 5 and half days a week and 1 and a half days ate more Carbohydrates.

After the initial brain fog period most people experience I felt good, lost a bit of weight and had good energy. After a while though I found it harder and harder to maintain. The restrictiveness of it became too much.

It is easy to get caught up in the hype of Keto. Especially when you see so many advertisements for the Keto Reset or Keto Challenge or whatever. Promising big results in a short time. While these results are possible they are likely not sustainable.

So if you find yourself thinking “I don’t want to only eat 30-50 grams of carbs per day forever.” then maybe you want to explore a different option or just realize it is a short term test for you. (BTW 30-50g of Carbs is about the same as eating one apple and one banana.)

If you are looking for a more sustainable way to get your Nutrition dialed in, join our 6 Week Nutrition Jumpstart.

Create a healthy mindset and relationship with food, develop skills and knowledge around meal planning and prep, and set yourself up for long term success.

You can check out a video with more info here. 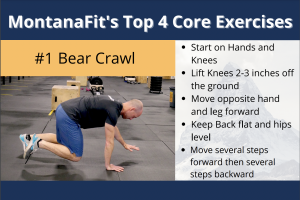 Fill out the form to Download our Top 4 Core Exercises plus Workouts!